A couple of years ago, I built my V5 uBitX HF Transceiver by HF Signals, which gave me a lot of joy on 80, 15 and 10m, mainly in SSB. All in all, I was very pleased with the transceiver besides a few minor things that where a little annoying. One of them being the encoder, which kept loosing steps randomly, which made tuning the VFO and navigating the menu a little cumbersome from time to time.

I did some modifications to the PA driver stage to even out performance on the different bands. I gave little attention to the important 40, 30 and 20 m Bands, as I was only holding a class E license and was not allowed to use them in Germany. That changed with my upgrade to the full license.

Last weekend I attended a field day we where having with a couple of radio friends and I got to operate on 40m and 20m for the first time. Before that, I was mainly listening due to antenna restrictions at my home.

When trying to answer a CQ on 20m, I ran into a weird problem. When I was transmitting in SSB the Raduino menu switched to "select band" and after ending the transmission, I could not hear anything. After confirming the band selection, the transmitter switched back to receive. Apparently, my transmissions went through, but of course not being able to hear the partners reply, a QSO was not possible.

The Antenna I was using was a simple end fed half wave wire, held up by an fiber glass pole and fed through a 1:49 transformer.

Immediately I thought of RF coming back from my coax, radiating into the Raduino, simulating pressing the encoder switch. As a first step I tried forming a coil of a couple of turns of my coax, close to the transceiver. I also added some ferrites I had with me, hoping this could stop the RF coming through the shielding, back into my transceiver.

The problem only existed on 20m in SSB. Other bands where not affected and also CW caused no issues.

Back at my home club, another club member suggested the obvious, putting a 1nF capacitor from the Raduinos encoder switch pin (pin 6, red) to ground (pin 4, yellow).  I soldered a ceramic capacitor directely to the cable connectors pins on the back side of the Raduino board.

I reassembled everything to test my modification and it worked like a charm. All the stray RF issues where gone. Surprisingly, the little capacitor had another effect. It also fixed the annoying step skipping of the encoder. I can not explain why it did that, since the encoder uses two separate pins against the ground pin.

Anyways. With these bugs fixed, I enjoy the little uBitX even more. What I really miss, though is AGC and a CW filter. So there is more potential for future modifications.

I also ordered the official QCX case for the transceiver which is manufactured by BaMaTech.

BaMaTech also offers what they call a "QCX button extension kit" for the case, which exposes the microswitch which can be used as a buildt-in emergency straight key.

The so called "kit" comes without any instructions and just adds one set of the button parts that come with the kit for the select and exit button. So figuring out how to include it neatly involved a little fiddling.

Measuring the distances of the pot, buttons, encoder and microswitch revealed, that they are all placed 19mm apart. The volume knob is also spaced 19mm from the cases left side. The key button can be placed another 19mm from the exit button which is the same as placing it 19mm form the right side of the case. I spaced it 13mm from the lower edge of the case, which is a little higher, but seemed to be the best place to actuate the microswith lever. 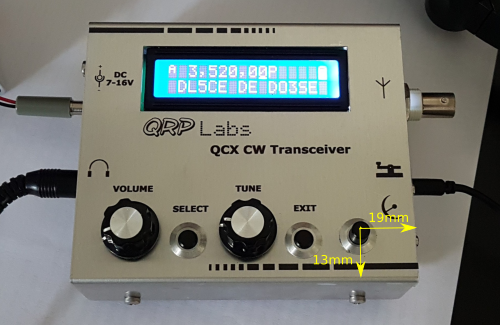 So I went ahead and but some painters tape on the cased top shell to protect the sticker during drilling. I then marked the spot for my 10mm hole 13mm from the lower edge and 19mm from the right. I then put the shell on a pice of wood and centerpunched the hole's position. Using a 3mm drill, I carefully drilled a pilot hole and a 10mm hole with a 10mm drill afterwards. I cleaned up the hole from both sides with a countersink bit.

Cutting the plunger was easy. I used the hack saw to cut off the shorter part which sticks out from the rim.

Afterwards everything was ready to be mounted in the case. I put some painters tape on the three plungers to prevent them from falling out while I was closing the case.

I recently created my own QSL-Cards in Scribus.

You can use the Scribus file as a template for yours. 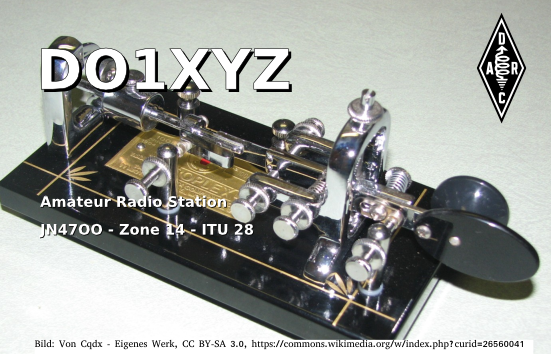 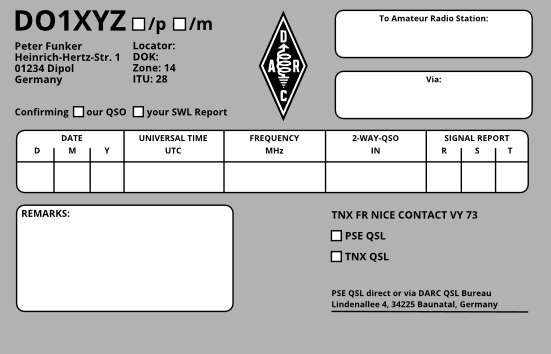